Welcome back blog readers. New publication available!
It is with great pleasure once more that I announce the publication of yet another of our papers in the series dedicated to the archaeology and history of the military fortifications of the bay of Matanzas, Cuba. In this occasion, we discuss new evidence – of archaeological, historical and geological nature –pertaining to the battery of Cagigal or Peñas Altas. Demolished in 1962, this battery was converted to a park and nearly forgotten by locals, was named in the honor of one of Cuba’s colonial governors: don Juan Manuel de Cagigal y Martinez, who governed the island from 1819 until 1821.


An abstract of the paper reads thus:

The coastal battery of Peñas Altas was the last fortification to complete the defensive system surrounding Matanzas Bay, Cuba. This research offers new information gathered from the analysis of unpublished maps, historical archives, and a preliminary archaeological survey. Such information has allowed us to limit the construction of the fortification between December 1819 and 1820, and not in 1818- 1819 as assumed by traditional historiography. Four important moments in its evolution are identified: planning and construction (1818-1827), remodeling (1840-1850), expansion (1876-1886), and a second remodeling in 1907. Peñas Altas functioned as a military post throughout the nineteenth century, and later became a police station and munition warehouse until its demolition in 1962. Only a few walls and part of the platform remain, however, they represent an important part of the lost heritage with potential for further research and tourism development.

The paper presents several unknown or inedited documents, plans, maps and photographs that record the history of the battery and the changes it underwent through Cuban history. We also explore the preservation of several of its surviving features and the possibility of turning its current state into a historical park.

The article is available on my other pages here, or on the page of the scientific journal Arquitectura and Urbanismo, on which it was published.

Thank you once more for reading and visiting. Stay tuned for more news! 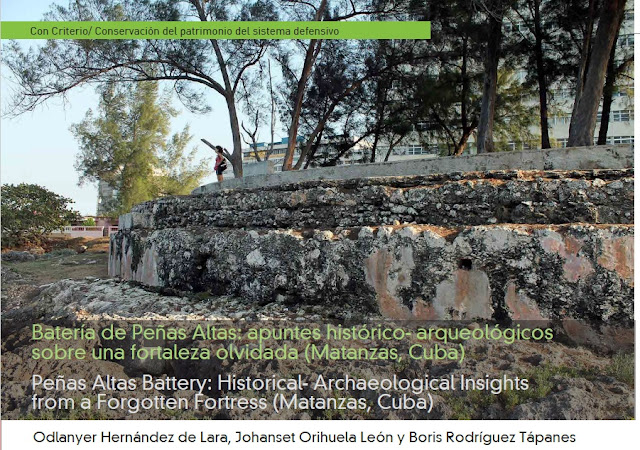 Posted by Joha Orihuela at 2:23 PM No comments: