The early years of the new millennium were very productive for my research in Cuba. Our explorations, between 1995 and 2002, turned up very interesting fossils, representing rare and extinct faunas. The fruits of these explorations included two new records for Cuba, pertaining to two of the Caribbean's rarest fossil bats: the common vampire bat Desmodus rotundus and Peter's ghost-faced bat Mormoops megalophylla (articles can be downloaded here).


Our fieldwork began in the foothills of the Alturas Habana-Matanzas, a chain of lowland limestone hills that run W to E on the northern coast of Cuba. Uplift and exposure of these limestones during the last 5 million years has given origin to a vast cave region laden with fossil deposits, dating to the last glacial and inter-glacial period.


Within this region, we focused on a 200-meter high hill named Palenque (fig. 2-3). The hills of Palenque served as a shelter to runaway aborigines and slaves throughout the colonial period. A "palenque" is the name given to such a hideout. We selected this region mainly because of unstudied caves discovered in the 1980s, with an interesting biotic richness and endemism, characteristics that had attracted two of Cuba's foremost naturalists Carlos de la Torre and Johannes Gundlach a century before. They visited Palenque's hillside in search of unique mollusks, mammals, and birds.


A secondary but well preserved tropical semideciduous forest covers Palenque (fig. 3) with a flora that includes several kinds of trees including oaks and mahogany (Quercus and Swietenia spp.), gumbo limbo (Bursera simaruba), Royal Palms (Roystonea regia), plus other Thrinax-like palms in the upper levels. There is even coffee (Coffea arabica) brought into some caves by large fruit bats (Artibeus and Brachyphylla) and birds. Most of the lower level vegetation that extends to the agricultural savanna at the foothills include several kinds of grass, the poison ivy, locally known as Guao (Comocladia dodonea) and the toxic Chichicate (Urtica dioica).


These fossil deposits originated from animal and plant remains mixed in with soil dragged into the caves by rainwater. Other were brought in by raptors, for example in vomitus, a form of hairball called pellet. Raptors, owls, and hawks do not fully digest bone and hair. Instead, they regurgitate them in the form of such pellets which accumulate in their cave roosts by the thousands (fig. 1, 6-7; note the round and brown pellet on the right of fig. 6). Because these raptors reuse the same roost areas from generation to generation their nests can include several thousand years of prey/pellet records. Even though their diet is selective, meaning they pick and choose from what prey is available in nature, theses pellets can provide a good record of the local fauna. The caves of Palenque provide an excellent record of that.


The first serious discovery came from a newly discovered room in Cueva de la Caja or the Cave of the Box (fig. 3-4), also known as Cueva de Los Nesofontes or Nesofonte's cave, named so for the huge accumulation of Nesophontes fossil remains (more on this curious species on a future post). As archaeologist R. Viera and I explored a section of the cave, we accidentally stumbled upon a small mound on the floor of a newly discovered side room that had gone unnoticed on previous expeditions in 1994 and 2002 (Viera and Orihuela, 2006). In it, there were plant seeds scattered in a mound on the cave's floor and a vampire bat skull right on top like a cherry on the cream (fig. 6-8).

Desmodus rotundus is endemic to the New World neotropics, where it is well distributed from Mexico all the way down to northern Argentina, but in the past, that distribution included Florida, Cuba. The first fossil record came from Cueva Lamas in Havana. This fossil was discovered by Cuba's foremost paleontologist at the time Oscar Arredondo, who then sent the specimen to Dr. Karl Koopman, chiropterologist (=bat-ologist) who identified it as a common vampire bat Desmodus rotundus, identical to the continental species. In the following years, other researchers found two more specimens from which a new endemic subspecies, Desmodus rotundus puntajudensis, was erected (Woloszyn and Mayo, 1974; Jimenez et al., 2005). Later, the Cuban paleontologist William Suarez (Suarez, 2005) raised the species to the rank of full species, which made it a full Cuban endemic.


However, the study of our well-preserved specimen (fig. 8-9) showed it was not referable to the new endemic form. Instead, our analysis of the skull characteristics of the continental form D. rotundus versus that of the endemic D. puntajudensis revealed that the Cuban fossils fell within D. rotundus, and did not represent a new form (Orihuela, 2011). This agreed with Koopman's original identification of the first specimen. As it seems, the Cuban fossil vamps are the same as the continental species, which may have arrived at the island during the last 10,000 years or less.

An endemic form would suggest long isolation for such evolution to occur. And the presence of both, an endemic species (or subspecies) and the continental form, seems unlikely out of so poor of a record. So far, the fossil Desmodus specimens are associated with ages less than 8000 years before the present, and thus within our own current inter-glacial period, but none date to the late glacial period as was originally considered. In fact, we do not know if they were true relics of the past glacial fauna.

Osvaldo Jimenez Vazquez and his colleagues discovered vampire specimens from a cave deposit in southern Mayabeque province (formerly Havana province), providing the first radiocarbon date associated with vampire bat fossils in Cuba. Their remains dated, although indirectly, about 7000 years before the present (Jimenez et al., 2005). Our specimen posed a more complex problem and brought about new questions. They were dated, indirectly as well, between the 1950s to the 1990s (Viera and Orihuela, 2006; Orihuela, 2012; Orihuela et al. in prep.). Unfortunately, neither Cuban vampire fossil has been dated directly due to the rarity of the fossils.


What is sure is that there were vampire bats in Cuba until very recently, even if just accidentally. Our research using maximum entropy software such as Maxent, DIVA and R, employed to predict and model which bioclimate variables could have limited bat distribution, and if any of the variables could have lead to their extinction, suggests that the climate of the last 7000 years, up to our modern climate, is still appropriate to sustain many currently extinct Cuban bats including the vampire bats (work in prep.). Their extinction is considered concomitant to the extinction of the large sloths (like those I mentioned in my previous post here), which were likely part of their diet. Now we know that these sloths did not disappear during the late glacial epoch either, but instead during the last 5000 years, which is within our current inter-glacial.

So what does this mean? Where vampire bats accidentally present in the Cuban fossil record? If so, why are their fossils so rare considering how easily adaptable and reproducible the species is on the mainland? Are Desmodus fossils present in other Antillean fossil records? These are questions our current research is hoping to resolve. Stay tuned! 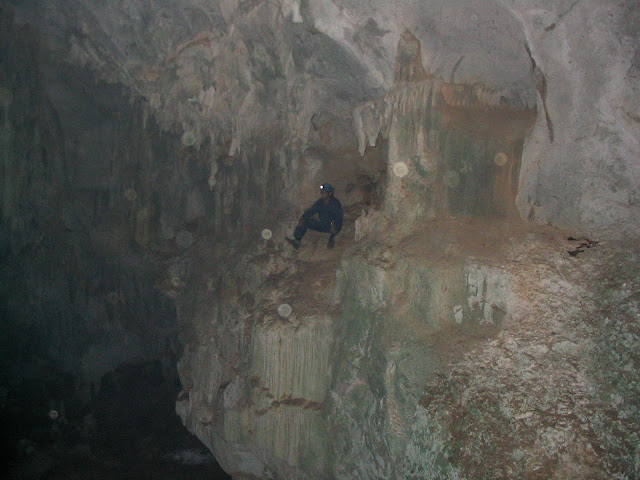 I want to take this opportunity to thank those that have helped on this research. First, I am eternally thankful to all those that participated in this expedition and those colleagues that helped with the analysis, their encouragement and help. These are archeologist Ricardo Viera, geographer Leonel Perez-Orozco, biologist Adrian Tejedor, Candido Santana and Joel Monzon, and many other more friends and colleagues that have made this research possible. These expeditions would have been impossible without their enthusiastic support.


This post is dedicated to the memory of Johannes Gundlach, whose birthday we celebrate today.

Orihuela, J., R. Viera, and L. Vinola. 2017. New bat records based on modern and fossil remains from the province of Matanzas, Cuba.

Posted by Joha Orihuela at 6:00 AM No comments:

Posted by Joha Orihuela at 5:38 PM No comments:


Hello everyone out in the interverse. I have just recently returned from a very successful fieldwork season in Cuba, of which I will be posting about soon, but for the time being I have an interesting piece written by my colleague and friend Osvaldo Jimenez to share.  If you haven't yet seen them, he's the author of several previous posts on fossil monkeys and the discoverer of some of those interesting fossil remains.

His new post titled "Shaman or Monkey" (in Spanish: ¿Primate o Chamán? ) deals with the discovery and interpretation of a very enigmatic cave pictograph representing what seems to be a dancing human figure, originally interpreted as an erect monkey (fig. 1).


Osvaldo's post tells the story of a local speleological group, so named Norbert Casteret in honor of that famous speleologist, that in 1981 discovered the interesting pictograph on a cave named Cyclone. This pictograph is enigmatic because it has disappeared from the cave wall, and so out of the radar of those interested in its study.

A cave pictograph is a form of Amerindian cave art executed with charcoal or any other form ocher-black colorants or pigments applied directly on a cave wall. These are somewhat common in the Greater Antilles, and especially Cuba, where they reach a high degree of technical detail and complexity. Such is the case of the concentric circles of Punta del Este, on the Isle of Pines (fig. 2), or Ambrosio Cave in the Varadero peninsula (fig. 3), northwestern Cuba.

Such cave art is attributed to Cuban Amerindians, originally named Siboney, but that for the sake of simplicity is now grouped with similarly related cultures such as the Guanahatabey. These Amerindians lived in Cuba between 5000 and 1800 years before the present (Dacal and Rivero de la Calle, 1996), had no ceramics, and only a simple shell-based toolkit. They inhabited coastal areas and used caves for religious-ritualistic purposes, including artistic expression and burial.

Much research has been conducted of these cultures and their artistic expressions and will be too extensive to cite here. For the interested reader the work of the late Dr. Antonio Nunez Jimenez titled Cuba: "Dibujos Rupestres" (1975), "Cuevas y Pictografias", and "El Arte Rupestre Cubano" (1986), in addition to "Art and Archaeology of Pre-Columbian Cuba" (1996) by Ramon Dacal Maure and Manuel Rivero de la Calle could serve as great introductory material.

Since the late 1980s, there has been a revival in the study and interpretation of this culture's art form in Cuba. At the forefront of such investigation are the archaeologist Esteban Maciques Sanchez, Roger Arrazcaeta, director of the Archaeological Cabinet (an archaeologically oriented sub-office of the Historian's Office in Havana, Cuba), and Jorge Garcell Dominguez to name a few. Some of the current work has concentrated on dating, interpreting, and correlating these Amerindian artistic manifestations with burial rituals, and the possible influence of the moonlight-sunlight cycles within the cave's space. Such news can be accessed on the site Cuba Arqueologica. For the relevant citations, the reader is directed to Osvaldo's interesting post.

Incidentally and to my great surprise, I made my first cave art discovery during a recent excursion to the caves of the Serrania del Palenque, a lowland limestone hill formation in the northwestern province of Matanzas. These seemed to be the intricate remains of a probable more complex piece that have now been erased by time (fig. 4).  However, the origin and age of this pictograph is presently unknown and currently researched. But it seems to be one of the very few discovered in the region!

I hope you all enjoy these ventures and stay tuned for more puzzle pieces from the Greater Antillean paleoworld.


Posted by Joha Orihuela at 5:38 PM No comments: