Fossil Matter turns one! How time flies. It has been a great year of rambling on old and new ideas. I am looking forward to another great year of research, discovery, and science.

And a great way to celebrate the ever ongoing process of science and the anniversary of my blog is by announcing the recent publication of my article Clay tobacco pipes from a colonial refuse deposit in fort San Severino, Matanzas Province, Cuba , in the International Journal of Historical Archaeology (available at Springer). It took nearly a decade to complete our research, and then finally find the time to write it, edit it, re-edit it, edit it once more, and did I say edit it again? Yes! 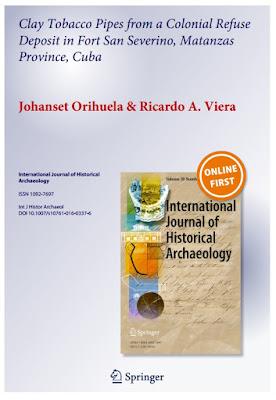 I co-wrote it/researched it with my colleague Ricardo Viera, who had the great opportunity to conduct the actual excavation at Fort San Severino (a subject of one of my previous posts), and to study the artifacts extracted there. He is also my co-author on our blog dedicated to the history of San Carlos de Matanzas, our city of birth in Cuba, where we took our first steps into the world of science and exploration.

In a gist, the article deals with clay tobacco pipes excavated from fort San Severino colonial-era latrines. These interesting objects provide a great insight into many aspects of the everyday life at the fort, for both the military personnel and the prisoners kept there. 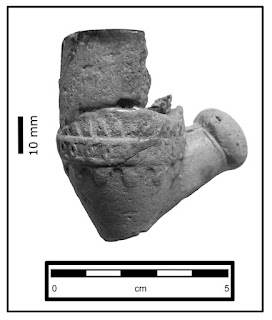 Clay pipes were used to smoke tobacco at the fort. Because they are personal objects, used for personal entertainment or habit, in times of leisure, they can tell us a bit about their behavior and preferences. Also, they can hint about the socio-economics of the fort, and because the fort played such a central role in the city of Matanzas, it too can hint about socioeconomics there. For instance, the dominance of one type of pipe over another can suggest where these pipes were likely coming from, and thus hint with who the fortians were buying or trading. Or if the articles were recirculated or reused in hard times.


These personal objects had a very short life, meaning they broke easily and were discarded rapidly. This provides great insight into the age of the artifacts, and how long it took the deposit to form. If it formed out a whim of re-construction or day to day trash disposal.

The trash in the latrines of our deposit, date to a period after the mid 18th century, that is the 1770s, and through the 19th century (the 1800s) until the latrines were filled as the fort turned into a military prison toward the last half of the 19th century. The presence of pipes manufactured in Catalonia, in Spain, corroborate well with the large immigration of Catalan merchants in Matanzas during this period. During the late 18th century Matanzas was a mere outpost with incipient trade, low population, and riddled by hardship. It is not until the mid 19th century that Matanzas blooms into the second most important port in Cuba, a status that dubbed the city as the Athens of Cuba. The tobacco pipes, along with the other artifacts, thus provide a snapshot of life at the fort during this important socioeconomic shift. They speak volumes on life then. 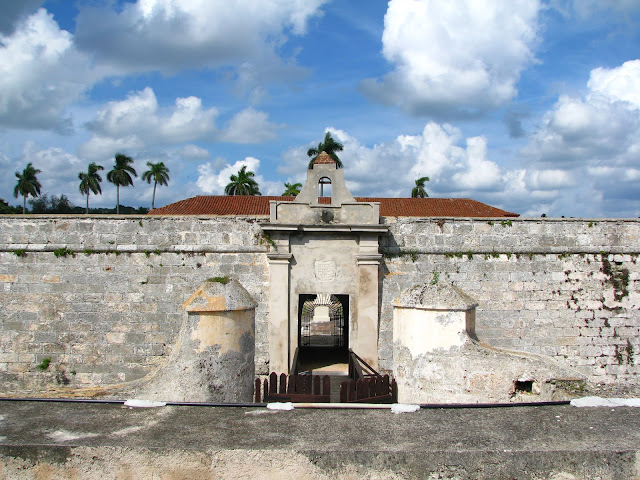 The history of the fort and its archaeology are very interesting, but I will leave them for another opportunity. However, bits and pieces of that history gleam in the posts of our joint venue with Proyecto Progressus, and the articles of the few archaeologists that have actually worked the site (citations therein).

Unfortunately, our paper did not make it in time for this year's SAA (Society for American Archaeologist) held, as I type, in Orlando, Florida. But I would like to take this opportunity, instead thank all those researchers, friends, and colleagues that helped us along the way. They are Leonel P. Orozco, Adrian Tejedor, Roger Arrazcaeta, Odlanyer Hernandez, Peter Davey, Byron Sudbury, Osvaldo Jimenez, and other pipe archaeologists around the world.

I look forward to yet another year of posts and more research, with the hope that it will contribute, at least a grain, in fostering an interest for our culture's historical sciences. The ancient philosophers said that learning and remembering history helps in advancing positively our society by not repeating the mistakes of the past and enriching our present.

Posted by Joha Orihuela at 6:02 PM