Columbus and Rediscovery of the New World

In October we celebrate Christopher Columbus rediscovery of the New World.

On October 11, 1492, Rodrigo de Triana shouted "land!" from the mast of the Santa Maria. The next morning, on the island of Guanahani, modern Bahamas, Columbus and his crew began an unprecedented conquest of the Americas that involved the extinction of thousands of species and the introduction of many others.

The most expensive, and even outrageous human enterprises have been military in nature. Science usually tags alongside such enterprises, but not riding shotgun. Columbus's exploration was funded by the interest of the Spanish sovereigns in search of new riches and a military position that could compete with the growing powers of Portugal and England. And although it brought map makers (cartographers), cosmographers and geographers, scientific interest was low in his first voyages.

It was only after that science extended its arms outwards, alongside colonization. Soon after the rediscovery--and I continue to use the term rediscovery because humans had already discovered the American continent some 15,000 years before, and northern Europeans 1000 years earlier--native Amerindians succumbed to the new colonist's diseases, enslavement and weapons. Unfortunately, the science that came along was opportunistic and cast a heavy weight on the existence of many native species with scant documentation.

The first colonists had to eat off the land, and in many cases brought with them animals that soon became feral where they did not evolve or were not suited for ecologically, driving other native species to extinction.

An interesting case is that told by father Bartolome de la Casas. In 1512, during the official exploration and conquest of Cuba by Diego Velazquez, he and is crew killed and ate thousands of Cuban macaws (Ara cubensis) in Casaharta, a town in central-northern Cuba.
The Cuban macaw has been extinct in Cuba since the 19th century but had been rare since the 18th century, when deforestation and overhunting for its beautiful feathers drove it to rarity, and later extinction. In the mid 19th century, the german naturalist Johannes Gundlach found it in the Zapata Swamp, southwestern Cuba.
A similar case has occurred to the Cuban crows (Corvus minutus and Corvus nasicus), and the Cuban ivorybill woodpecker (Campephilus principalis) to name a few.  These species had survived at least a million years of climate change, and over 5000 years of Amerindian coexistence, to become extinct during the colonization (see some of my own research on this here). 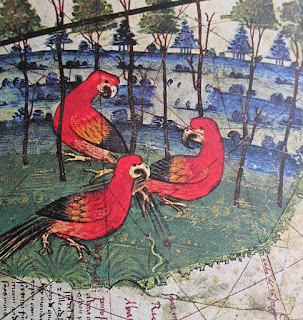 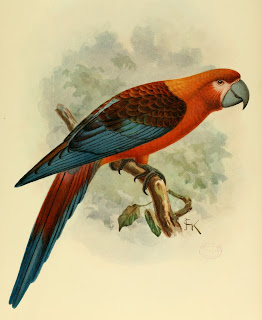 But the scientifically inclined explorers served well by documenting what they could about the lush natural richness of the Americas. Among them, Peter Martyr, a geographer, was the first historian of the New World. Others such as the Spanish Oviedo and the Italian Benzoni included detailed accounts of the native species found in the American Eden. Plants, animals, and even cryptic mythological creatures were initially described, such as the manati, a water mammal though to be a siren. Its scientific mammalian order--Sirenia--carries the idiosyncrasies of the era that brought it--through science--to world knowledge.

Posted by Joha Orihuela at 5:03 PM