Trilobites-Sea Cockroaches of the Ocean

Trilobites were the sea cockroaches of the paleoworld. They were marine arthropods, highly adapted to multiple types of ocean ecosystems and diets that included all sorts things from the ocean bottom. This versatility and diversity helped them dominated the oceans for over 320 million years. Yes! That’s millions of years! To put in context, dinosaurs ruled the world for nearly 200 million years, whereas us humans, as a recognizable biological species, have existed for only a mere 300 thousand years. That’s less than ten percent the time trilobites existed on the planet.


Trilobites belong to the animal phylum Arthropoda. Arthropod means jointed legs, one of the characteristics that define the group of segmented, jointed-leggedness, hard-bodied animals that include the insects, spiders, scorpions, crabs, and lobsters. 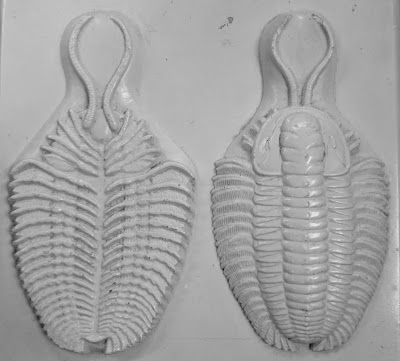 Yet, their acme or time of greatest diversity and distribution, occurred during the Ordovician, and lasted for millions of years until the Devonian period, when fish-like predators began to keep them in check. Their large eyes, capable of all-around vision, and hard segmented bodies (carapace) likely arose out of the necessity to look out and scape from such predators. Their interesting and unique eye characteristics were reminiscent of frogs. For that reason, scientists gave them names such as Phacobs rana, or “frog-like eyes”, best known from fossils commonly found in northeastern North America.

Trilobites inhabited shallow, shelf, marine environments. By having eyes and eyespots on the top of their heads, trilobites could watch the world above their backs. The hard, segmented body, allowed for multiple forms of locomotion, swimming, and flexibility. Some species were more swimmers, others more bottom crawlers. Their tracks are known from rocks made from ocean bottom muds. They fed mostly on anything, from small organisms to organic matter and sea bottom detritus. This included dead organisms that fell down to the ocean floor. This made them, sort of, ocean bottom vultures or cockroaches. That goes besides their obvious physical similarity.

An analogous species today would be the horseshoe crab or lobsters.