The mandible from Puerto Principe: The search for human antiquity in Cuba

In 1847, Miguel Rodriguez Ferrer discovered partially fossilized human remains near Los Caneyes, on the southern coast of Puerto Principe, modern Camagüey province on the island of Cuba. A human mandible among them would figure as one of the inciting pieces that lead the search for mankind’s antiquity in Cuba. 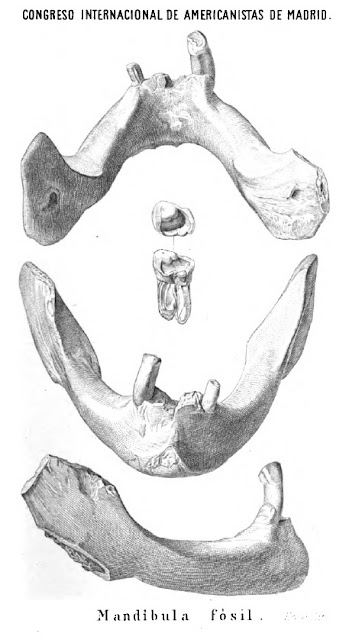 Miguel Rodriguez Ferrer was a Spanish geographer and naturalist, an erudite who visited Cuba on several occasions during the XIX century. He is the author of Naturaleza y Civilización de la Grandiosa Isla de Cuba (1876-1878), an extensive two-volume book on Cuba’s history and natural science – among the first to scientifically divulge the island’s natural history. 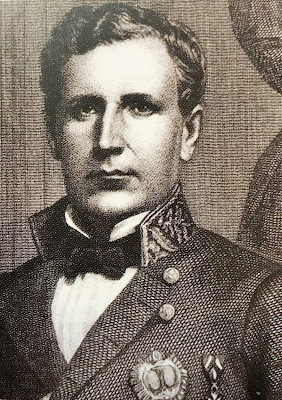 Ferrer’s archaeological discoveries were by no means the first. In fact, his expedition to Los Caneyes was sparked by a letter sent to him. On June 23, 1847, Pedro Santacilia informed him of known “fossilized” human remains – a cemetery – discovered in 1843 by Bernabé Mola in a coastal site or cay called Estero de Los Caneyes, near the bay of Santa Maria Casimba, south of Puerto Principe, modern Camaguey Province.

Sr. Mola, also a Spaniard, had published the news of his discovery under the title “Fossil Human Skeletons” on the Memorias de la Sociedad Económica de La Habana (Memoirs of the Economic Society of Havana, 17: 457). By then Ferrer was well acquainted with most of the Cuban eminent scientists, such as Felipe Poey Aloy, his son Andres Poey Aguirre and Antonio Bachiller y Morales; the last two considered today the fathers of Caribbean archaeology.

A “fossilized” mandible figured among the remains Rodriguez Ferrer found at Los Caneyes. Immediately, the context of this discovery - an indurated or mineralized layer of ash, shell fragments, and gravel – suggested great antiquity for the specimen, and implied the presence of several cultures of different levels of technological advance in the area. Ferrer referred his specimens to Felipe Poey, who studied them in detail. Poey published part of his results in his Repertorio Físico Natural de la Isla de Cuba (1866) but does not mention the mandible. 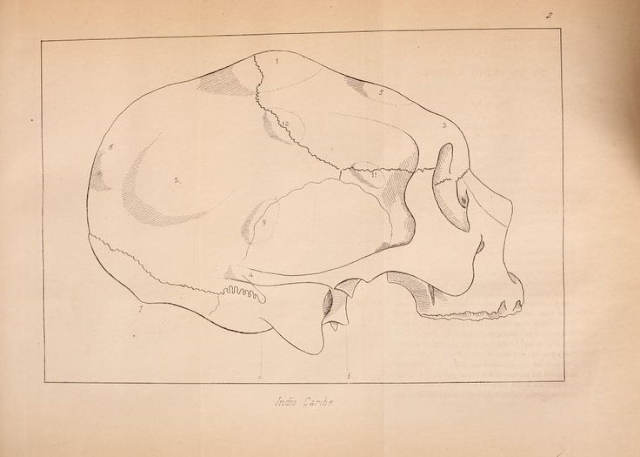 The mandible, among other artifacts, had been donated to Spain in 1850 and forgotten for 14 years. It is not until 1871 that the mandible and the other human remains are studied again. Ferrer gives the specimens to academics of the Spanish National Museum, among them Sr. Graells, who estimated that they were fully fossilized and likely older than the European Stone Age, meaning greater than 30,000 years in age; thus creating sort of a Stone Age period for Cuba by transposing aspects of European archaeology and natural philosophy to our insular contexts based on their stratigraphic association.

The remains excavated by Rodriguez Ferrer were then studied by Henry de Saussone, who showed in the Madrid Americanist Congress of 1881 that the specimens, especially the mandible from Puerto Principe, were not fully, but partially mineralized, and could instead be just several thousands of years old. Therefore, pre-Columbian in age and not from the Stone Age. 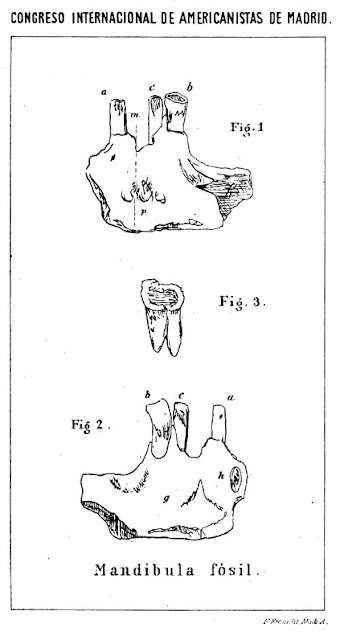 By then, one of Cuba's foremost scientist and among its first anthropologists, Luis Montané had discovered human remains in better-preserved contexts, such as those of Cueva del Purial, in the mountains of Banao in the province of Santi Spíritus. Several of Montané’s specimens were studied by the prominent Argentinian paleontologist Florentino Ameghino, who classified them as Homo cubensis, in part following the tradition of Homo diluvii testis of Cuvier, postulated nearly a century before.

Montané, however, did not agree with Ameghino’s classification, and did not consider the Cuban human remains, nor the mandible from Puerto Principe, as a new fossil species, but instead as regular modern human – Homo sapiens, and indeed the mortal remains of one of Cuba’s native pre-Columbian population.

It is thus how the mandible from Puerto Principe discovered by Rodriguez Ferrer became a symbol of the search for Cuba’s earliest native populations. Those remains were the first to stimulate questions regarding the diversity of Cuba’s native cultures, their chronology and the relationship of their contexts. The discovery of the Amerindian mandible from Puerto Principe in 1847 consequently marks the serious beginning of pre-Columbian archaeology and anthropological research in Cuba and the search for mankind’s antiquity in the Caribbean islands.

Posted by Joha Orihuela at 4:56 PM